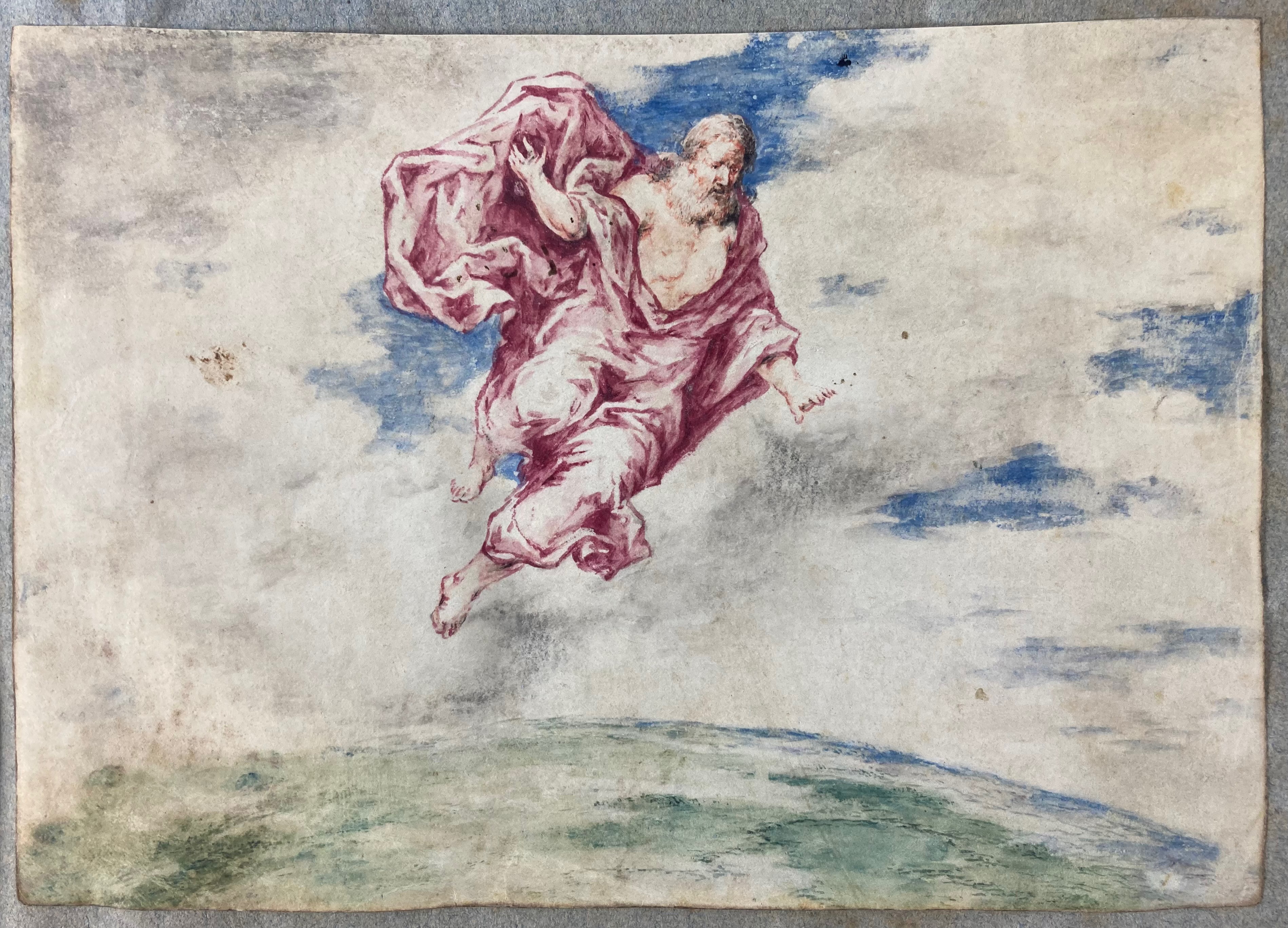 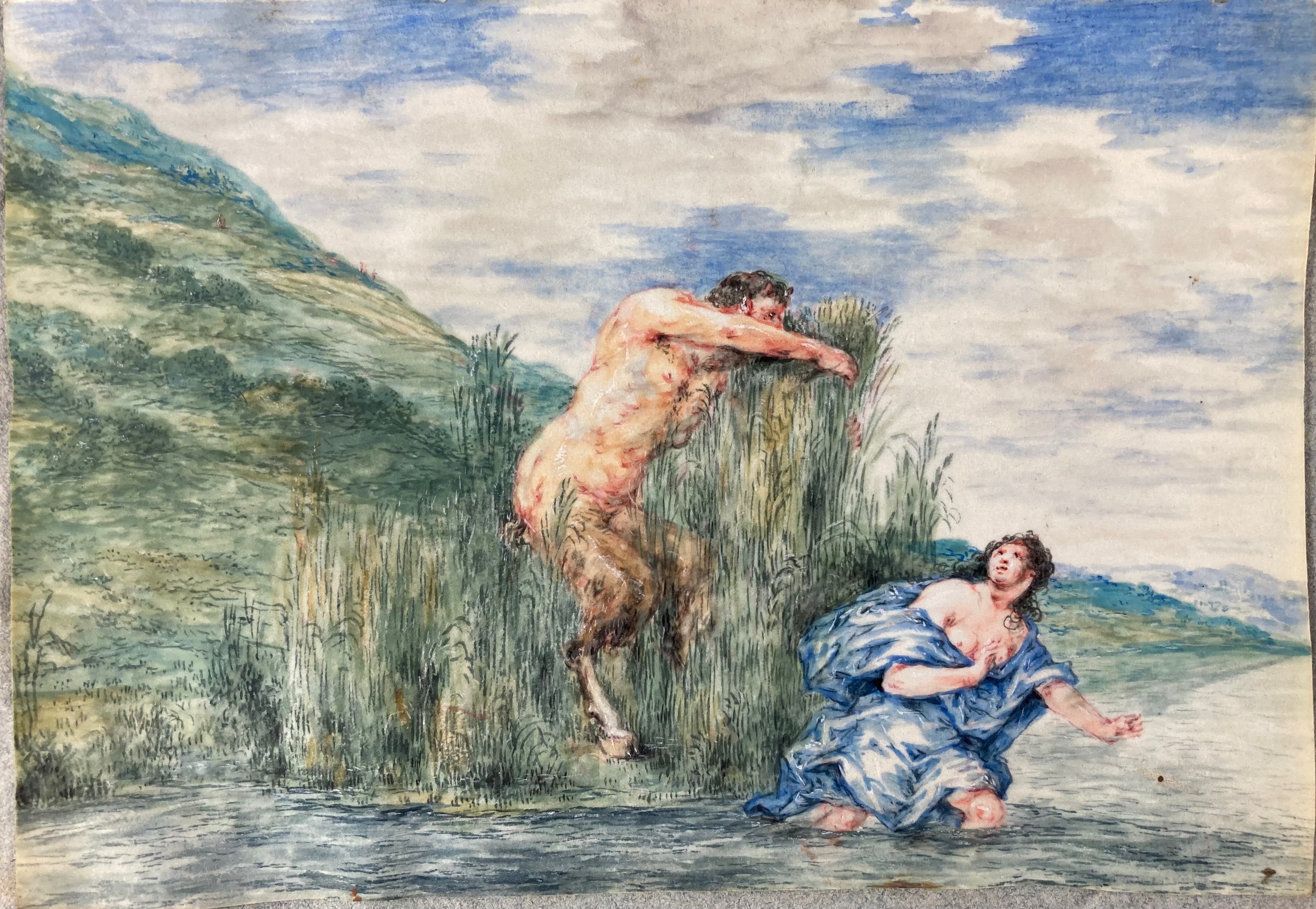 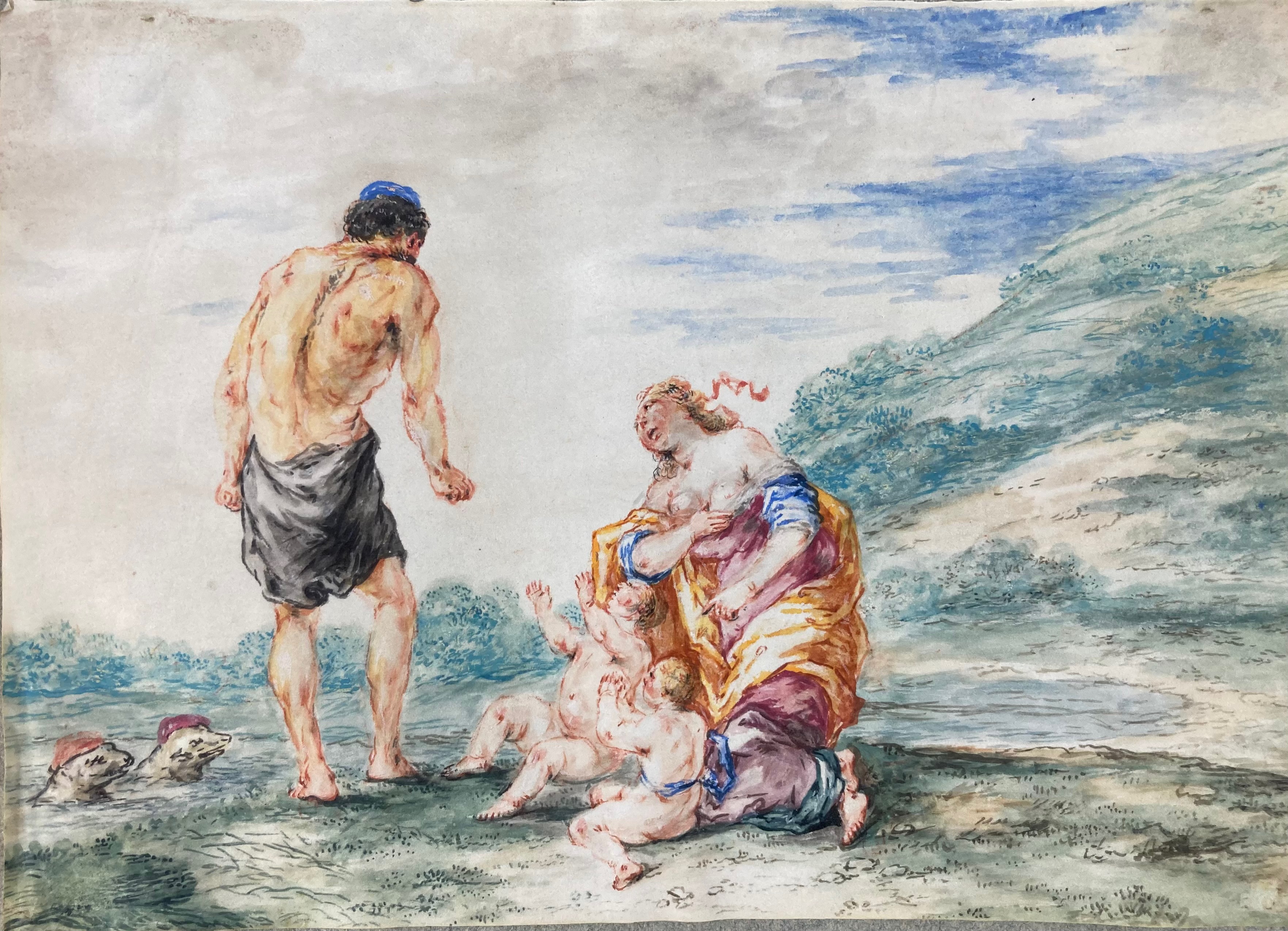 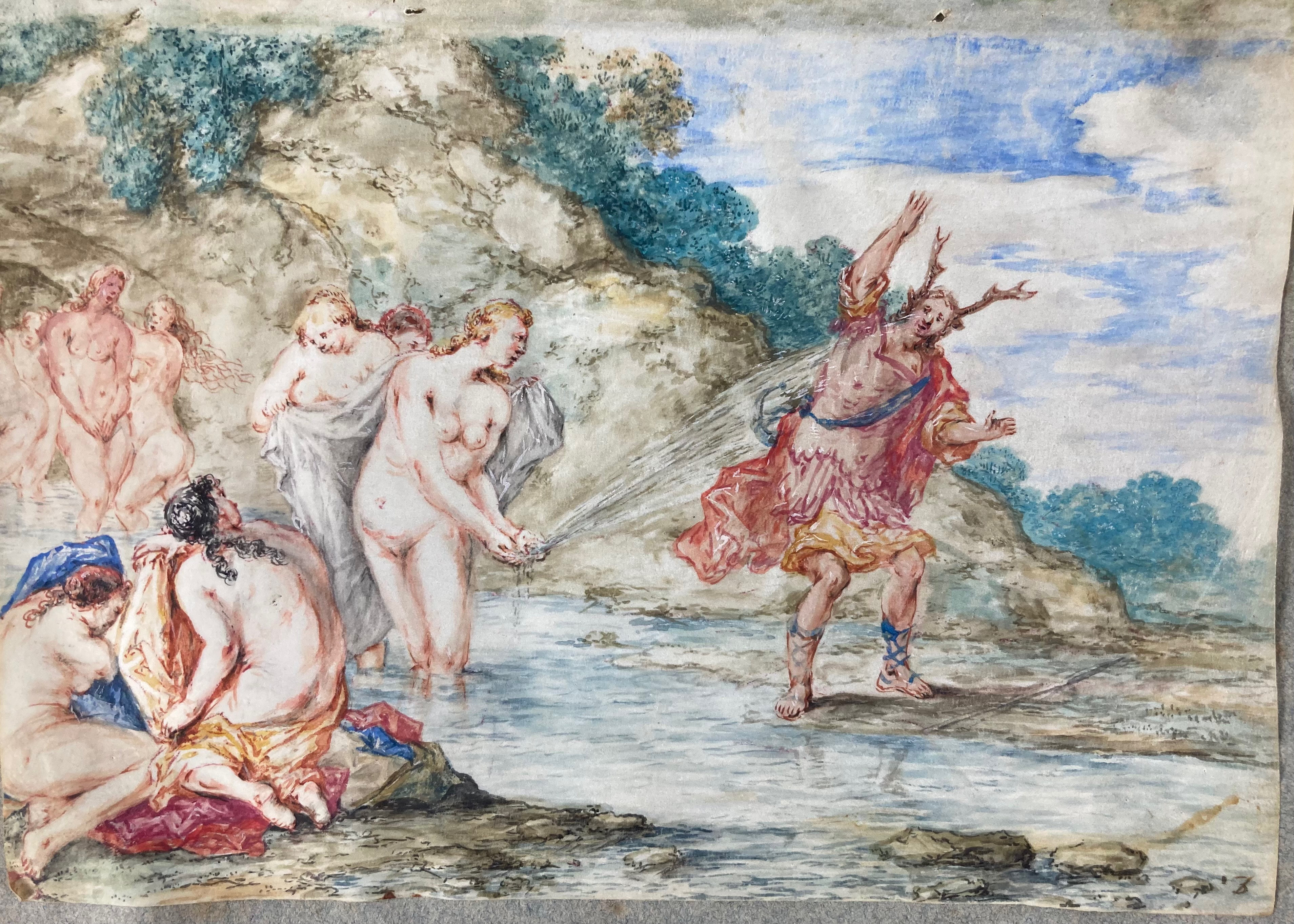 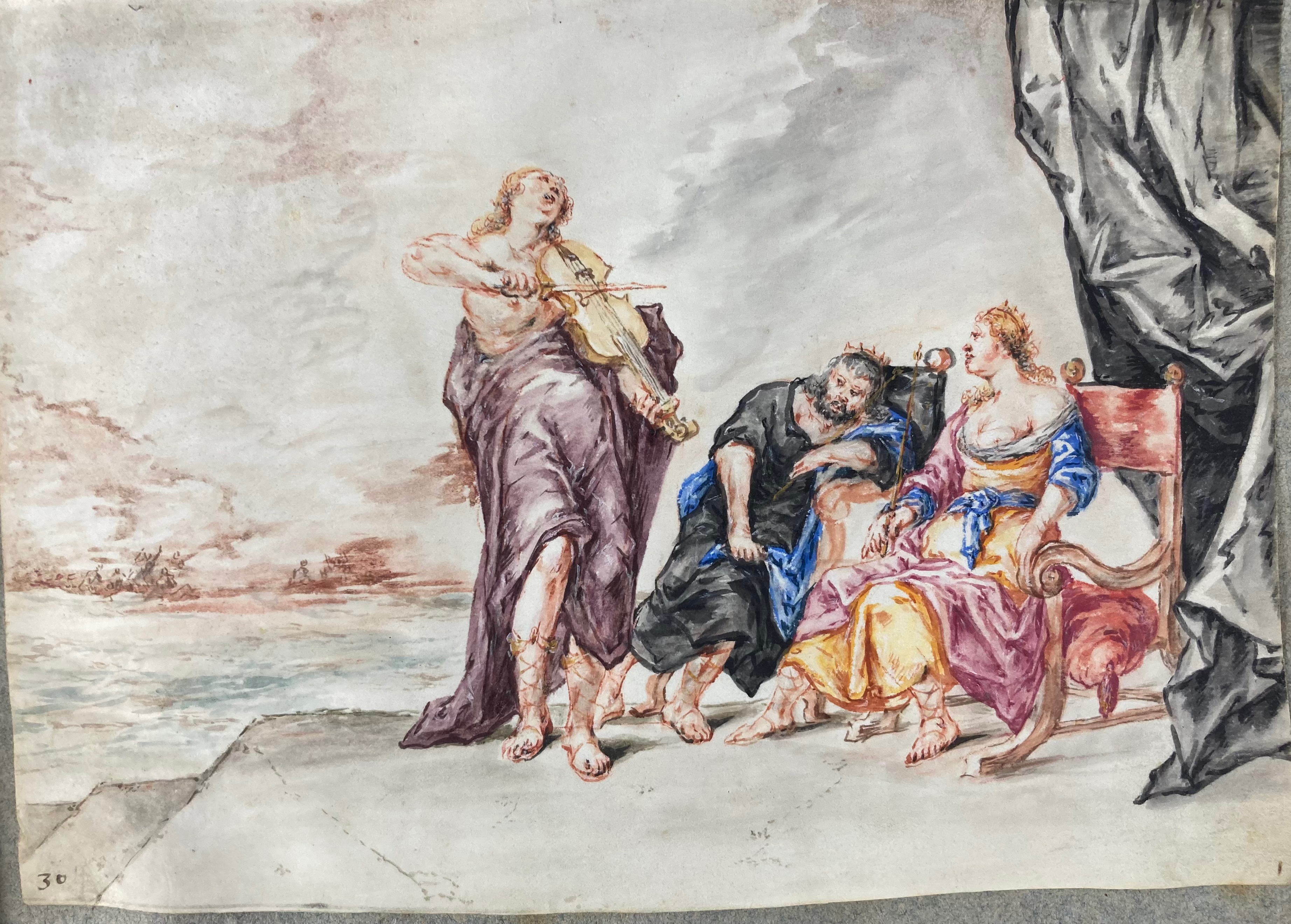 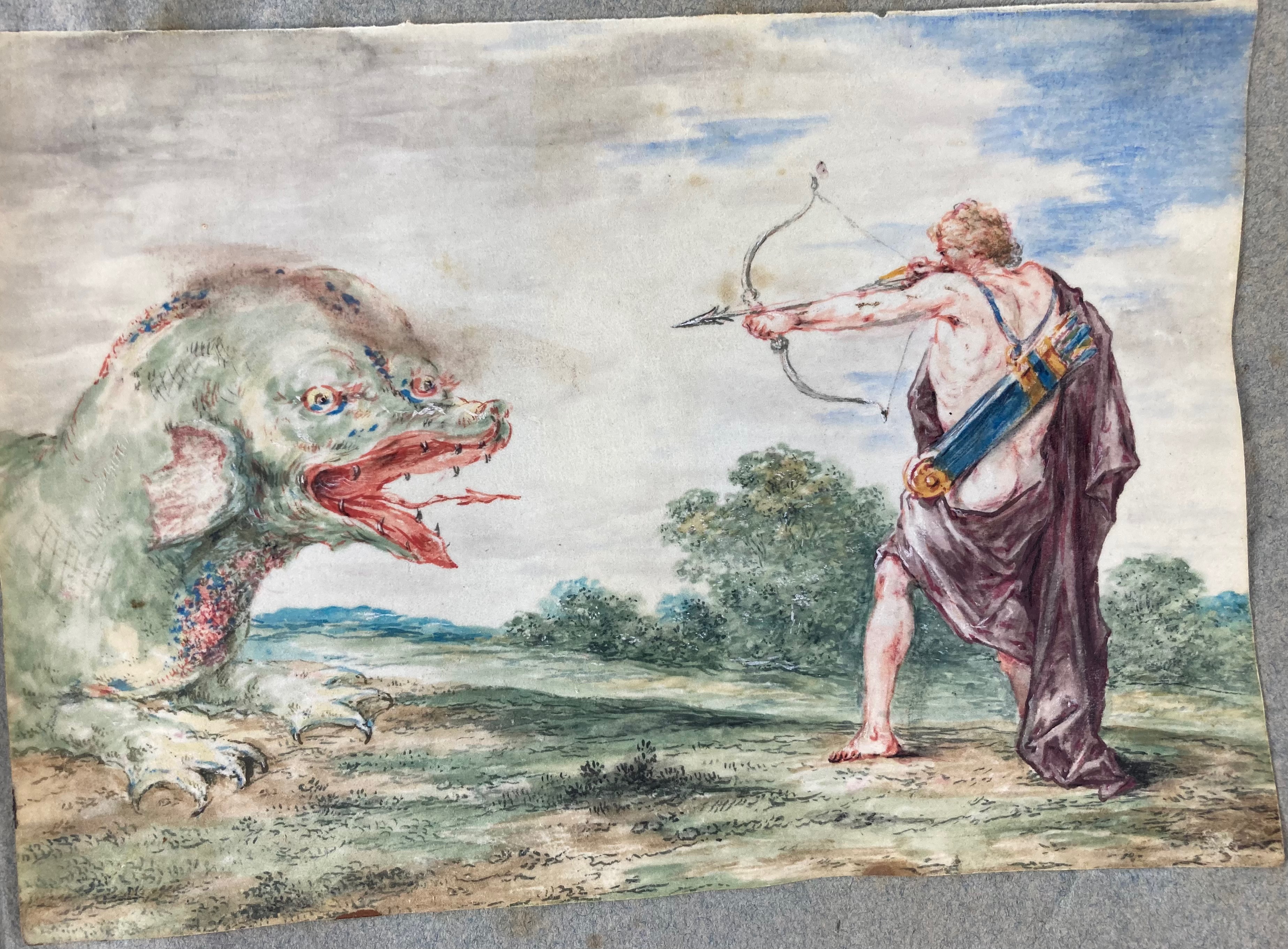 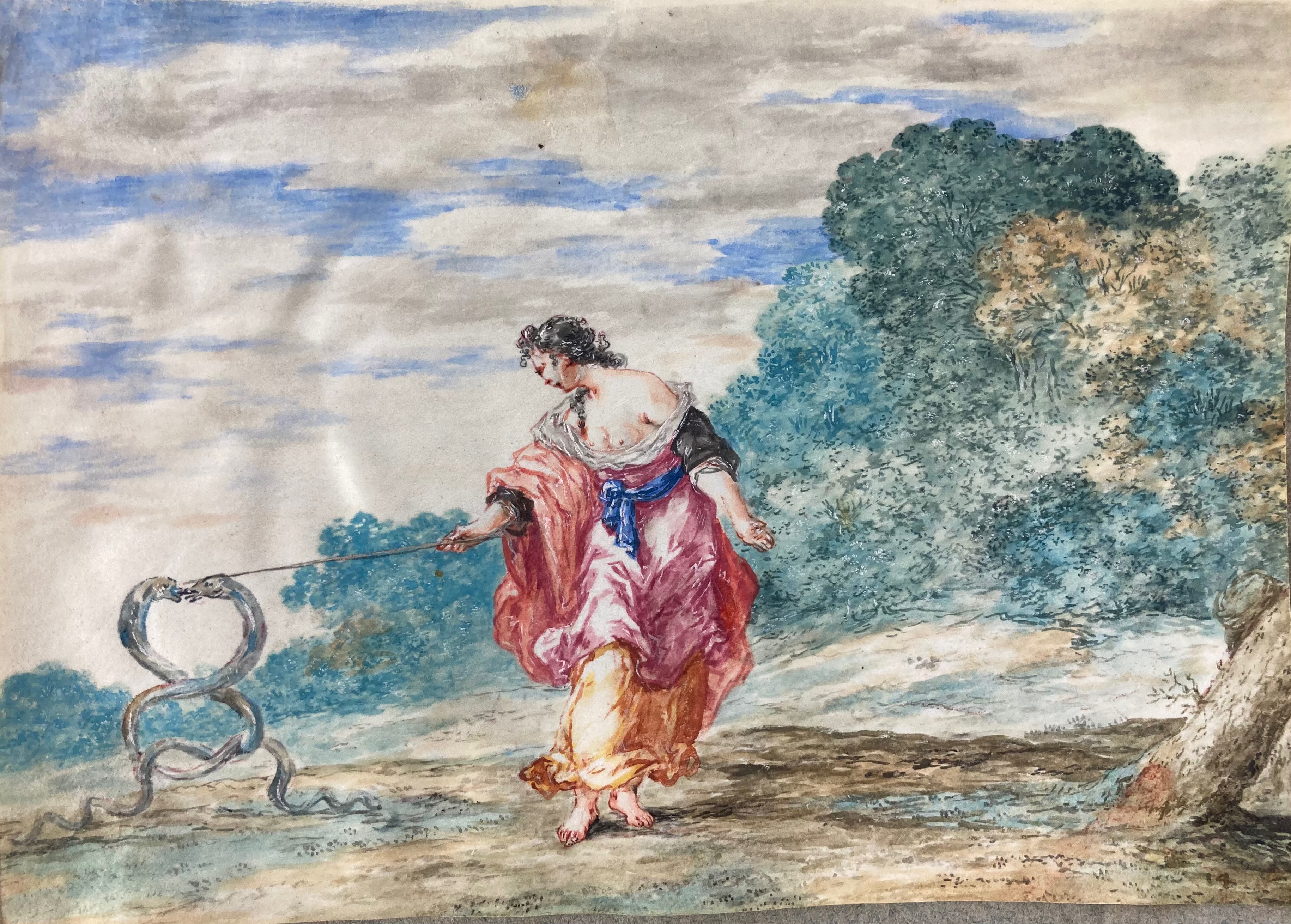 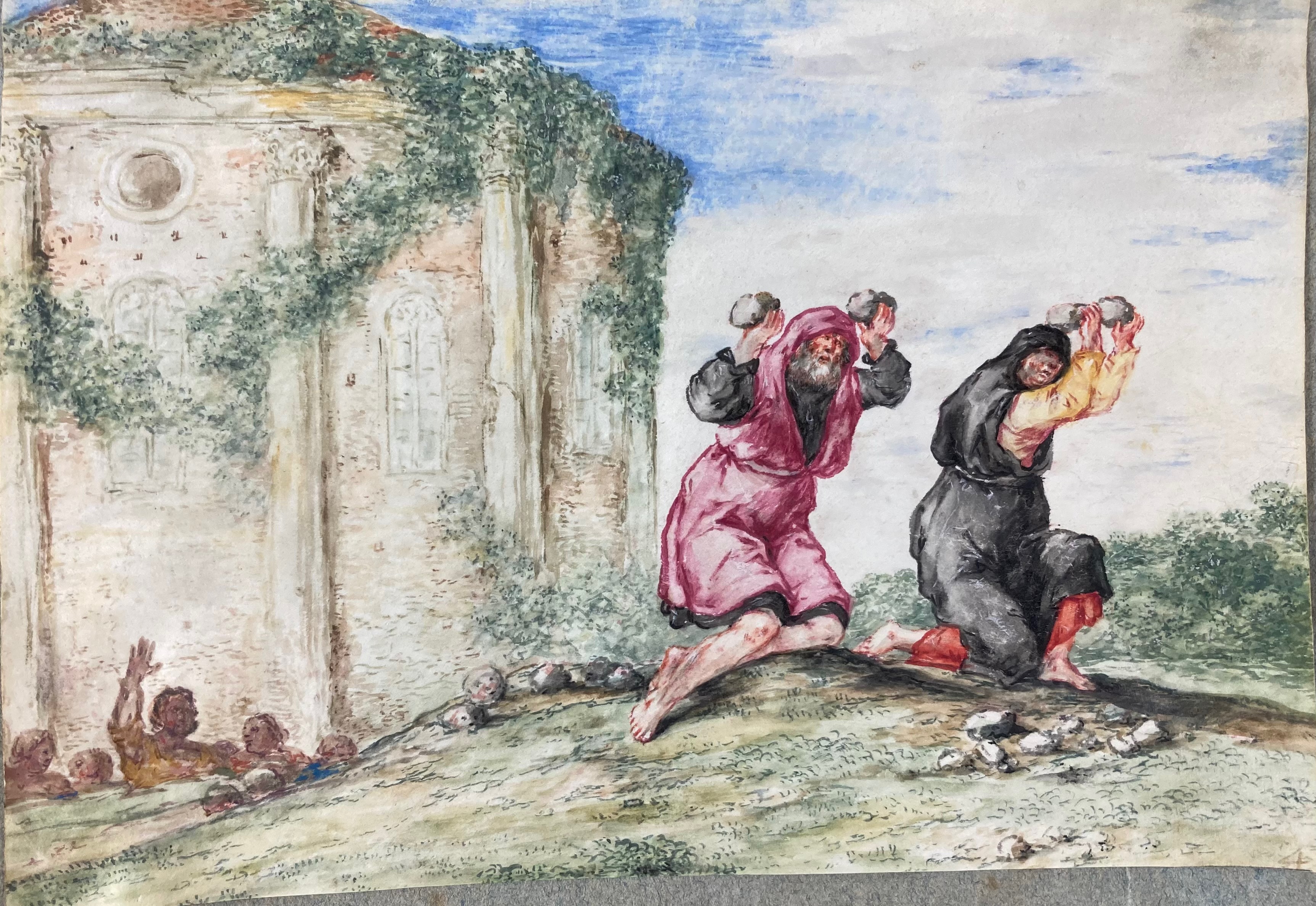 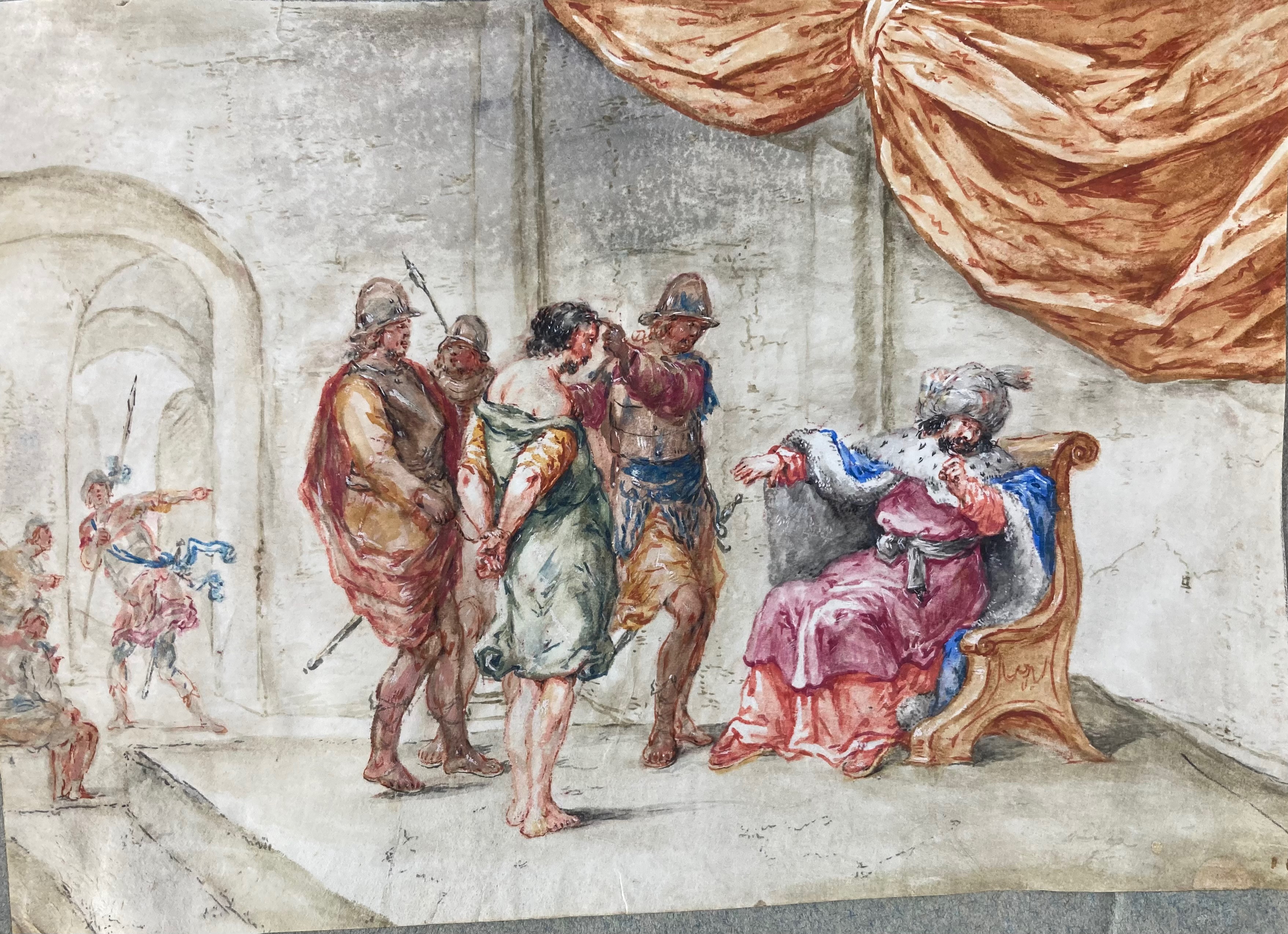 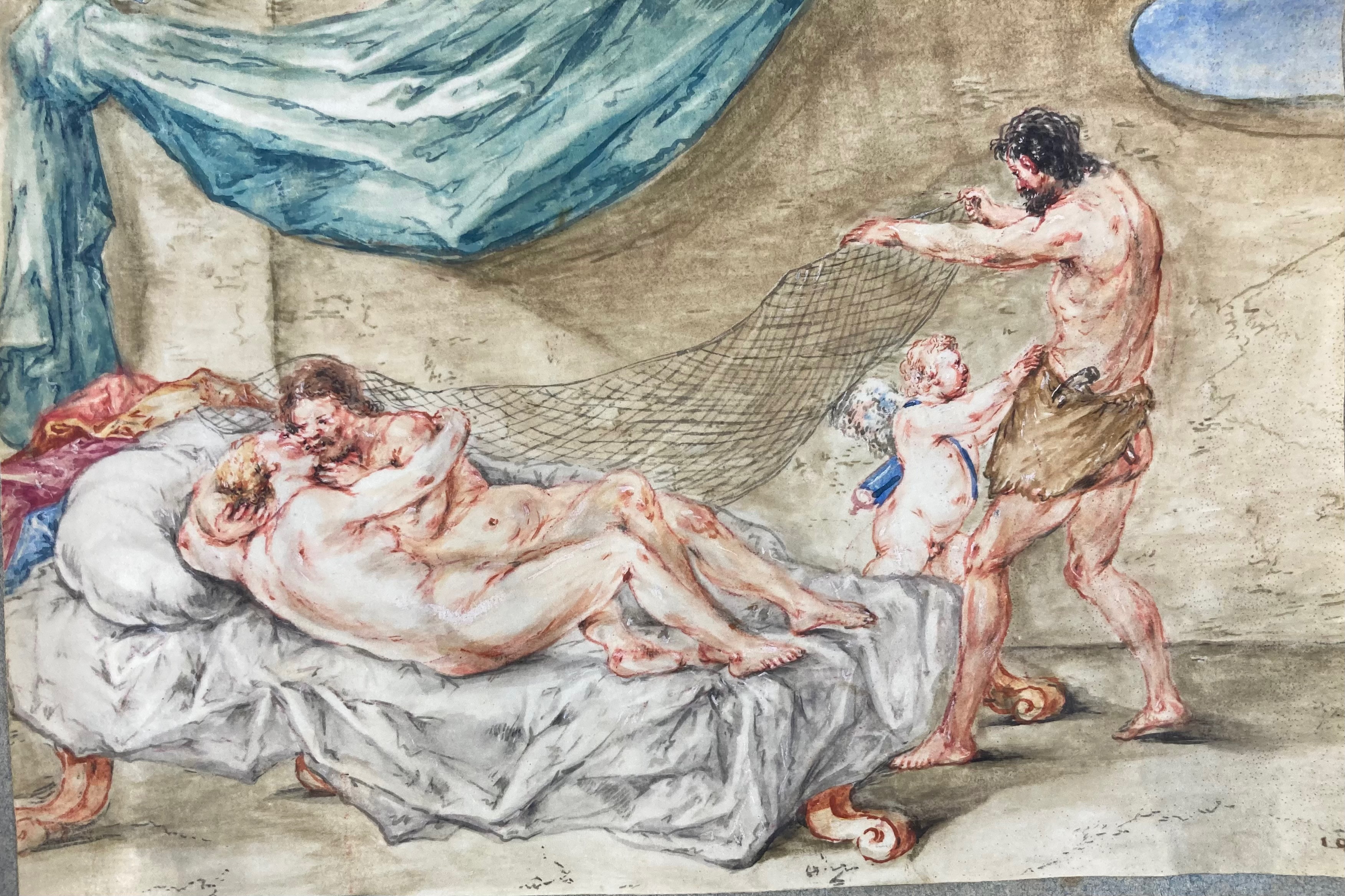 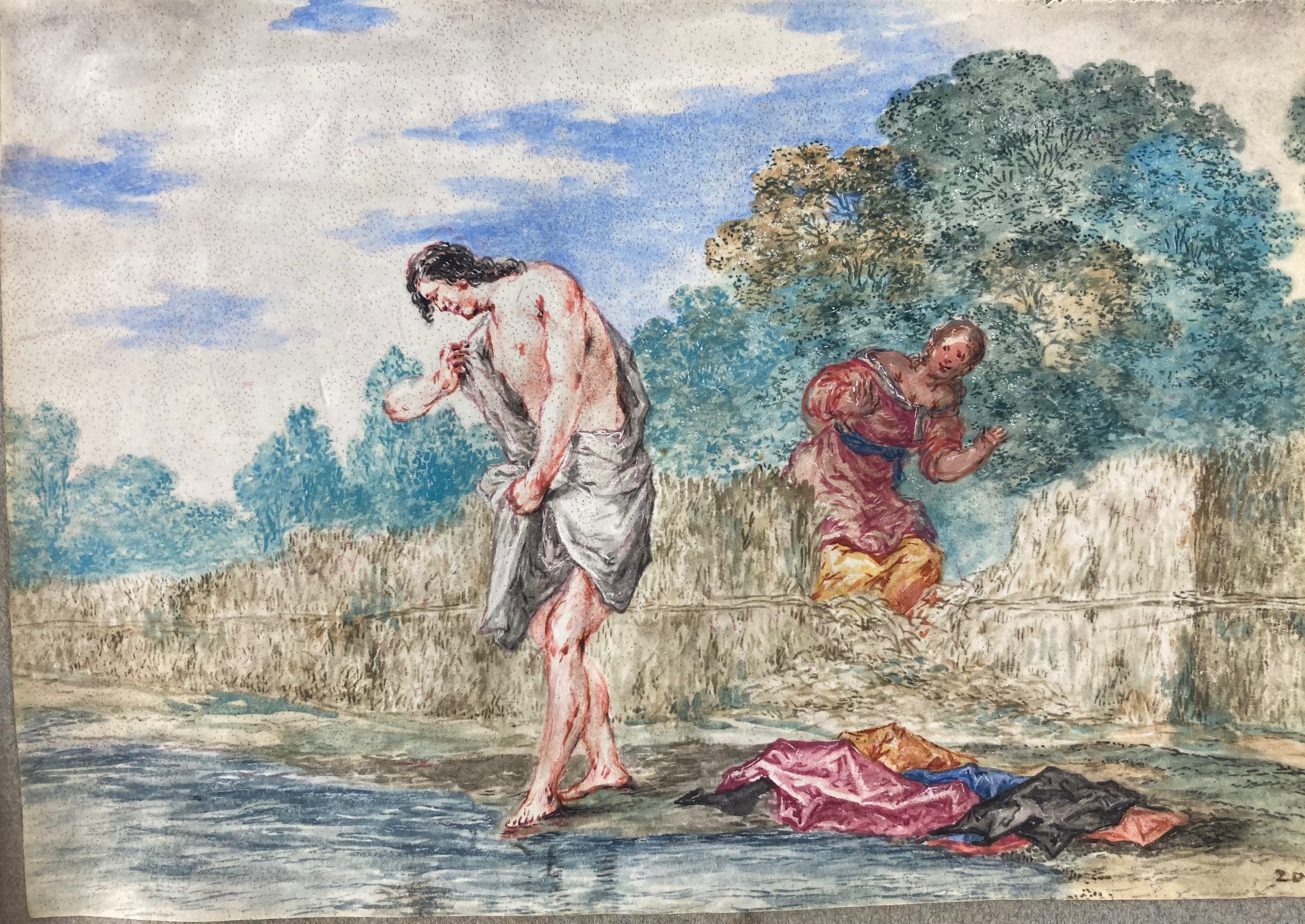 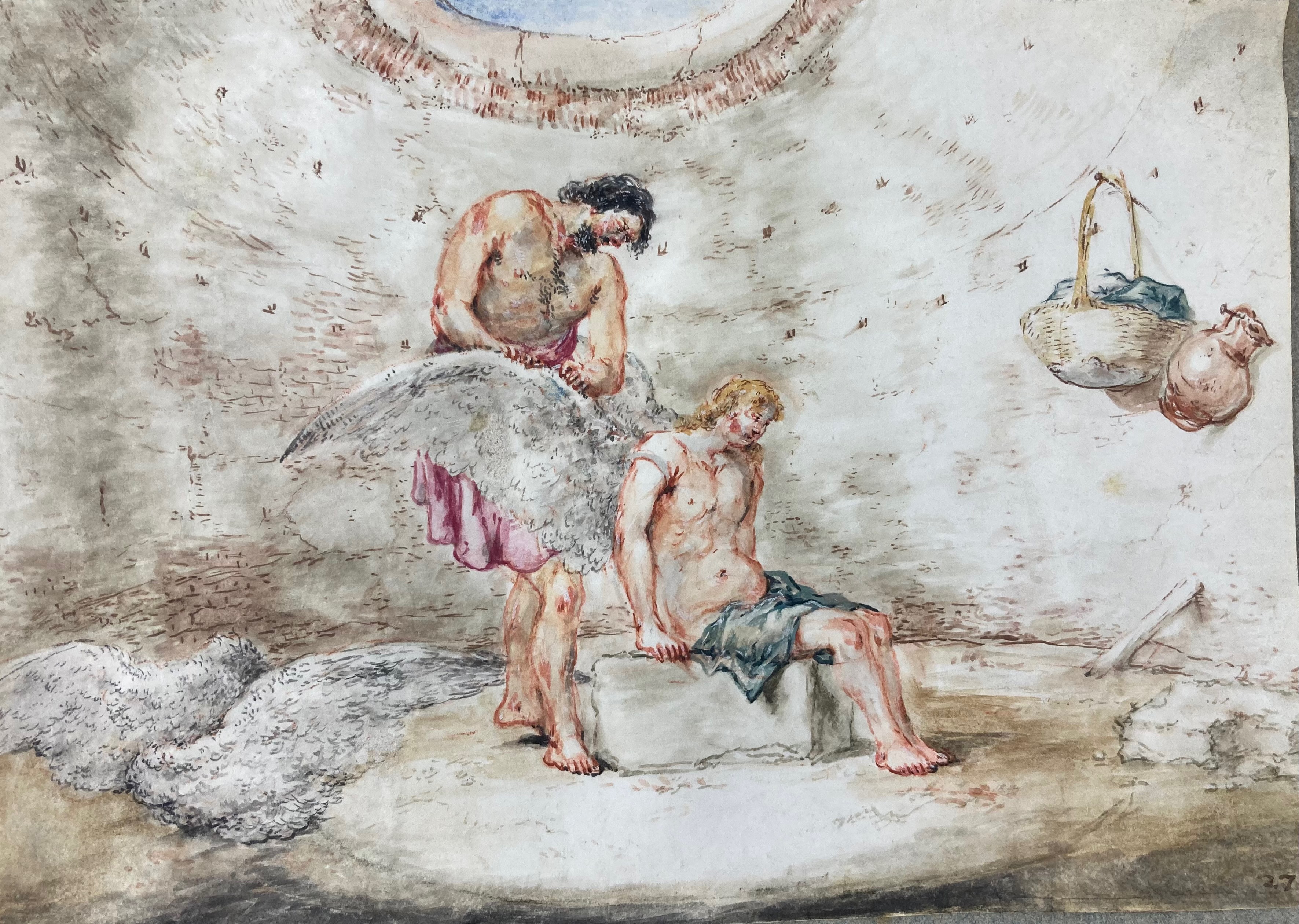 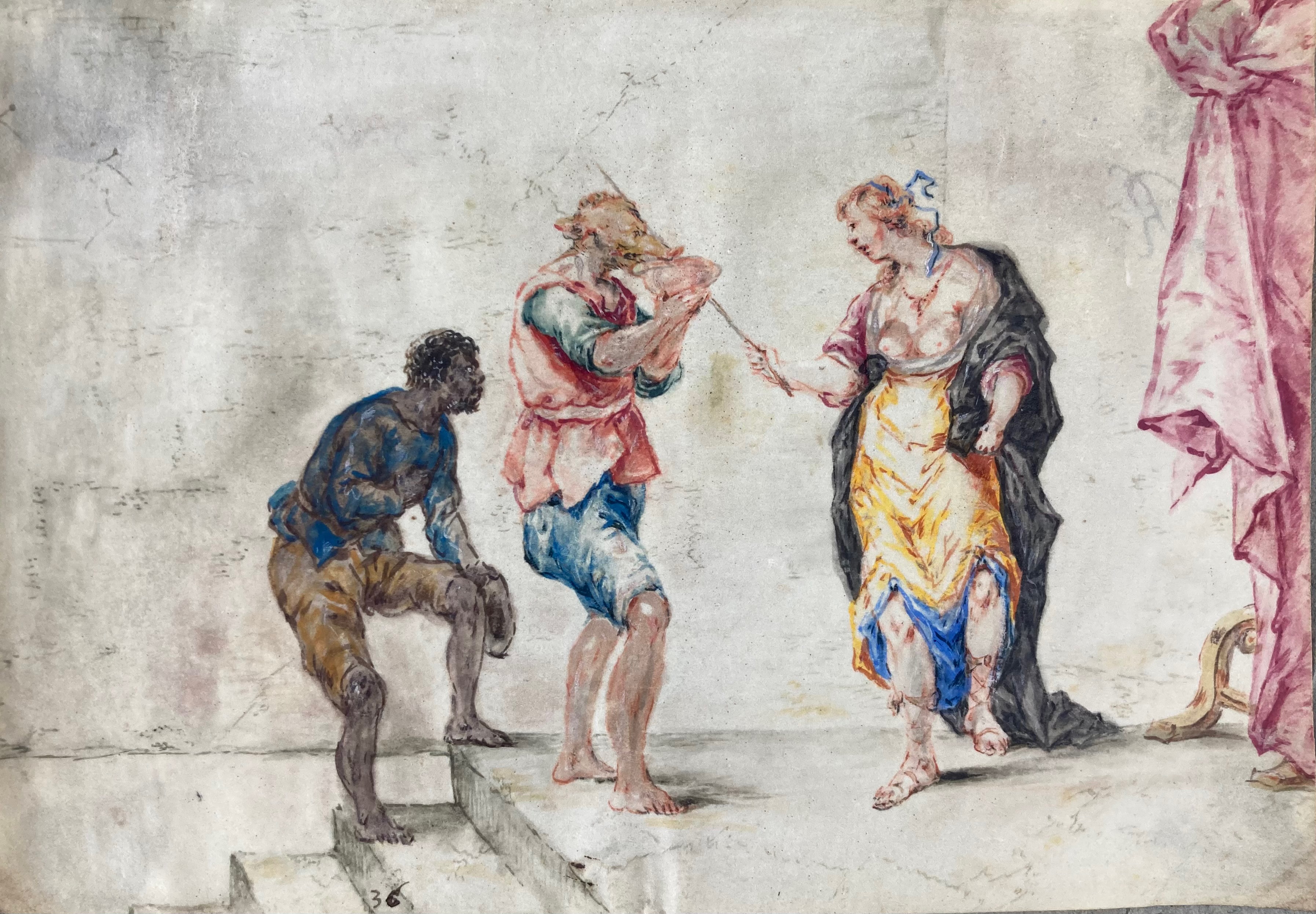 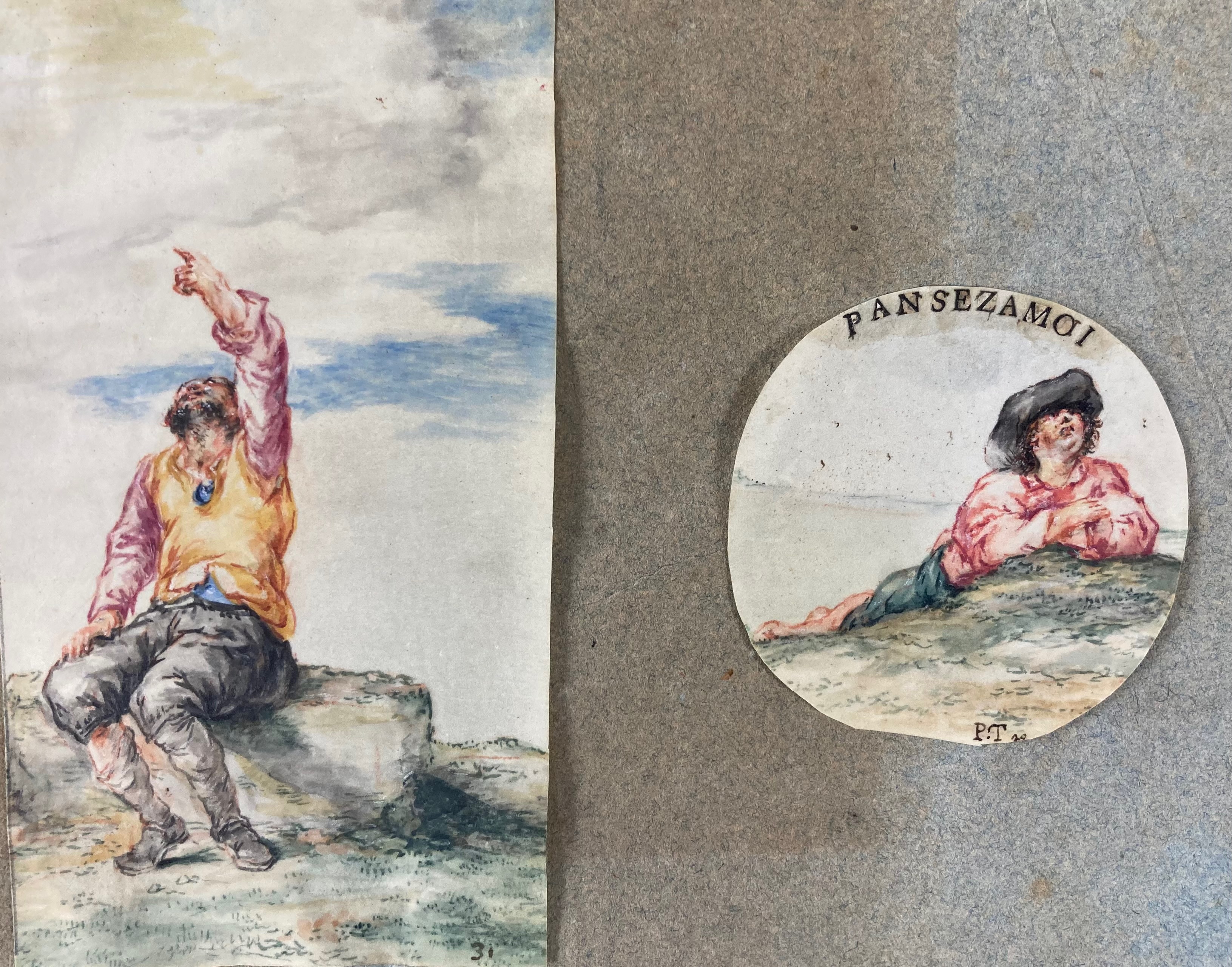 Collection of 23 fine drawings presenting scenes from Ovid's Metamorphoses, all tipped in on blueish laid paper, measuring c. 138 x c. 195 mm each. Leonaert Bramer, Dutch genre and history painter, active mainly in his native Delft, traveled widely in Italy and France between 1614 and 1628. He was one of the members of the Bentvueghels (Dutch for 'group of birds') and also one of the few Dutch artists to paint frescoes in Holland, but none of his work in this medium survived. He evidently knew well the greatest of his Delft contemporaries, Vermeer, for he came to the latter's defense when his future mother-in-law was trying to prevent him from marrying her daughter. In fact, it is likely that Bramer, rather than Carel Fabritius, was Vermeer's teacher. Some of the Metamorphoses drawings are numbered in the outer lower corners, but - if so - in an incomprehensible sequence and with gaps. The drawing of 'Actaeon and Artemis' (the 7th drawing in the album counted from the 1st) seems to be monogrammed 'LB' in the outer right lower corner. The album contains paintings of many famous stories: 'Pygmalion and Galatea', 'The Fall of Phaeton', 'Cadmus killing the dragon', 'Perseus turns Phineus to stone using Medusa's head', 'Deucalion and Phyrrha after the flood', 'Icarus receiving wings by his father', 'Meleager and Atalanta', 'Narcissus', 'Latona and the Lycian Farmers', 'Circe changing Ulysses' Men into Beasts', 'Mars and Venus surprised by Vulcan', etc. The album includes also 2 other, but smaller, drawings on vellum in a similar style, one of which represents a man sitting on a block of stone pointing with one arm to the sky (134 x 76 mm), and the other is a drawing on a circular piece of vellum (Ø 64 mm) of a young man lying (on top of a dune?) and with edge lettering in the upper margin "pa[e]nsezamoi", monogrammed 'P.T.' (perhaps Philips Tidemans (1657-1705)?). The latter have no clear connection to the Metamorphoses drawings. On the upper paste down a written former owner's entry is laid down: "Eigendom van [possession of] Bsse. M. v. Tuyll v. Serooskerken van Coelhorst, Lange Vijverberg 20 Den Haag". This album was part of the exhibition in Delft in 1994 'Leonaert Bramer, 1596-1674 - Ingenious Painter and Draftsman in Rome and Delft'. On the lower paste down 'Leonard Bramer' has been written in an old hand. As far as we have been able to determine, the v°-sides of the drawings are blank.